Have you ever stopped and thought about what runs on the Internet nowadays? (this is important).

I mean, really, if there happened to be an unexpected “outage” that affected just the Internet, what would that mean and how would it affect you? 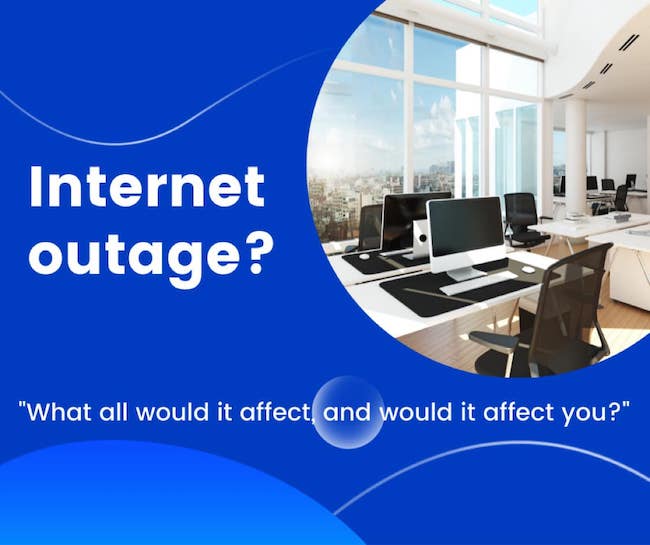 First, you have to step back and isolate a few different ways the Internet is used. I’m sure you’ll add more to this list, but it’s a starting point off the top of my head to make sure we’re on the same page.

What else? I wonder how much of our medical infrastructure (hospitals, clinics, nurses, pharmacists, ambulances, etc.) is run online? How about transportation (Uber, planes, buses, subways, etc.)? How about out police departments – what all runs on the Internet nowadays?

Over the last 20 years we’ve shifted, as a society, to a largely Internet-dependent group of people and most people just expect it to all be there.

But, what happens if it goes down?

Will the lack of Internet affect your daily life? Will you be able to go to work? Will you have power at home (this is a good question as it relates to how the power company is set up)? Will traffic lights work? Will stores in your area be open? Will they take cash only (ATMs won’t work)? What about gas stations?

Gosh, and that’s just the start.

Why am I bring this up? Well, friends, for many months now it’s been said that a formal release of certain information in one of our states would be blocked by a major communication blackout so no one would be able to see it or talk about it as it may be a bit disruptive to a lot of folks.

That said, the public release date for that info to be delivered/released was announced today and it’s next Friday (24th) – it was expected last week, but it didn’t happen… again.

On a different note, and probably just super-coincidentally, Forbes dot com released news about 2 weeks ago (I’ll link it in the comments) that our sun had just hiccupped that last Saturday and by Monday of that next week (last week) we were going to be hit with a solar storm that just might knock out North America’s Internet. They were prepping us to all be ready for this rare “solar event” as it stands to be the most disruptive hiccup to ever be recorded. And yes, we’ve been hearing about these potential “solar events” from weather dot com all summer as they, too, think it’ll affect us, but it hasn’t yet (notably, it’s been thought the results would be released for the last couple of months as well, but they haven’t yet).

Now, many on one side have speculated, for months, about how the communications would go out and what people would think. I suppose, if they all believe it’s caused by random, never-before-happened geomagnetic hiccups that simply hit one continent, then it’s seemingly plausible.

What I’m saying here is this. If there is a “solar event”, regardless of what causes it, we have a lot to think about. Know that there are many ways this can happen and many potential outcomes, none of which occur in just a matter of hours, and none have particularly good outcomes for many Americans.

If something were to happen, we’ll all have to deal with whatever happens in the best way we know how, so at least know that if what Forbes says is true, there’s a real good chance we’ll go back to our pre-Internet days for at least a “short” while, if not months.

For those of you who’ve never seen the world without Internet, you may finally get to see the world you heard about, but couldn’t fathom.

I’d be interested to see what kind of story is concocted if a delay is announced in the “data” release. Perhaps we’ll see another “close call” to getting hit by the “solar event”? Who knows? Perhaps we’ll actually get “hit” by one near the new release date. Perhaps it’s real and has nothing to do with the data release?

And, it doesn’t matter your views on any of this, these are the current games being played. Fare well, friends and take care of one another as best you can. We’re all gonna’ need to rise to a whole new level of consciousness. Getting through this current pan to the dem ic is proving to be tough, and the belief that an “outage” could happen at any point now is held by many.

So, I ask again… what’s your take? What all would it affect and would it affect you? I know I’ve just scratched the surface so I’d love to see and read how you’d immediately be affected. Hypothetically, of course. 🙂