Hiss and herss. The other night we made pizza and bread sticks. Joanna left the room right when I started to cut everything (not the cheese). The breadsticks were abnormally round, especially since they were made in a rectangular pan. “That smacks of a rookie” I thought. I contemplated and wondered (are those all that different?) which of the standard three (3) cuts I should use. Should I cut it into small strips that are all straight lines? Or, maybe the larger square-like bread sticks that people are used to? Or, perhaps we do the typical pizza pie cut as they’re sometimes more interesting this way? Nope. Not feelin’ it. “Dad! What are you doing?” I hear. And then… “What the …?” Luckily, we have a fairly heavy duty pizza roller cutty thing. Round and round I went. Carefully maneuvering as my reptilian vision came to life. Then, as soon as I popped the head up a bit, Kelbie said “wait”, ran over to the peppers she’d just chopped, grabbed a couple and “Wham, Bam, Thank You Ma’am!” We’d managed the perfect “pie-thon” cut as the non-government funded civil serpent came to life. I had a strange sense of unexpected bliss. I smiled contently. The kids were all pleased. My parents even gave me thumbs up. 👍 👍 I quickly snapped a picture (the first one) so I could capture the reptile in the safest way possible so as to not get bit. 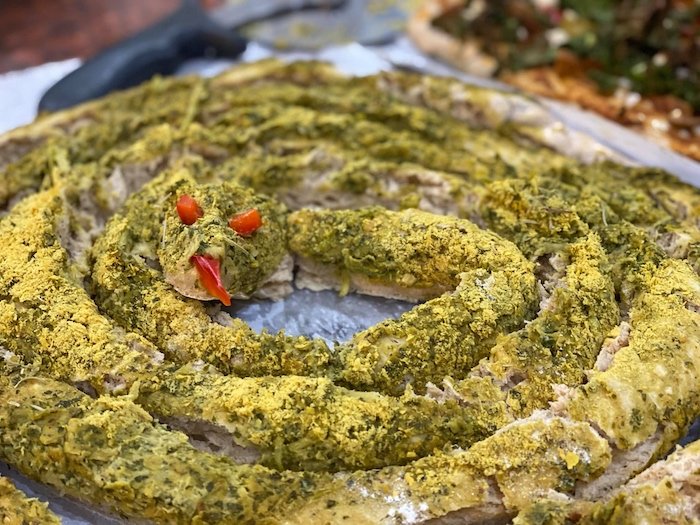 “Snap!” (I don’t know how to make the sound of my phone’s camera so a “snap” will have to do). Just after said “snap”, Joanna slithers back in. Instant approval. Instant bliss. Instant smile. “Oh my gosh! That’s so cool!” she exclaims. And then she whips out her phone and we hear “Snap!” (that’s the second picture). 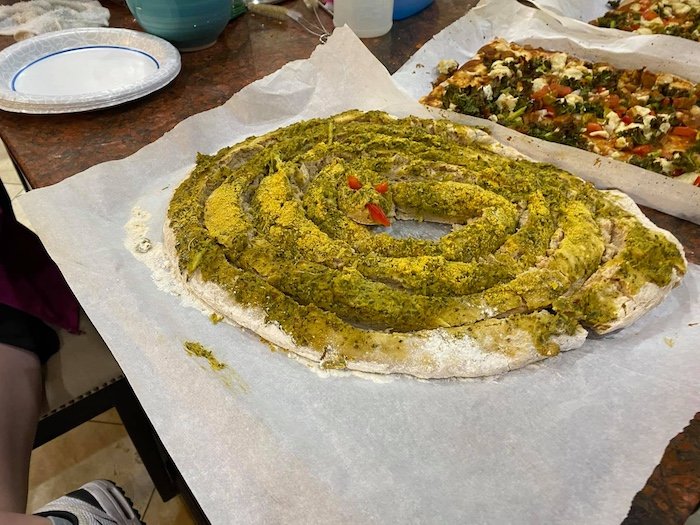 We all watch as Jo can barely contain her excitement. “I wanted to get a picture before you guys uncoiled it” she says. Paxton, laughing hissssterically, blurts out “let’s compare your picture to dad’s!” and I instantly cringed. In Joanna’s defense, she doesn’t take many pictures. She relies on me, but often is chastised for not even trying. I was impressed that she thought of it and took action. You only get better if you try, right? The next 30 seconds as the kids compared the pics may have done more harm than good, but I could be wrong. Though their comments were venomous, she laughed along with them and was a good sport. I thought, if ever there was a right time for a hissssy fit, it would be now. Nope. Nothing. Better yet, she was still sporting a sense of pride and accomplishment for even taking the shot. The following minute or two was encouraging for her as she continued to focus on the fact that she took action – period. And for that, I can commend her. For all her well-developed talents I’ll just say she’s way better than she used to be.