Y’all have no idea how big this moment was for me.

Well, this is my youngest, checking for “anything that doesn’t belong” on one of the many surfaces she had to clean last night.

A couple of days ago I posted how she left us a note instead of doing her dishes. Well, truth be told, she’s the youngest and has had trouble keeping up with the sheer amount of work we go through and has somehow not taken on the “I care about my work” attitude quite yet.

So, now, a bit more context to better understand the struggle.

Her job changed for the week (it’s now counters, general cleanup and sweeping in the kitchen) and yesterday morning I came out to see an absolute “crap job” and I called it out to her only to be met with “I did the best I could” to which I said “well, this is unacceptable.”

Now, you may not know this, but my youngest is feisty and loud and insubordinate at times. It may seem cute, but it’s really anything but as her work ethic is, in my best golf terms, sub-par. From the outside one could easily think it’s just part of growing up and that everyone goes through it. And, while that might be true, I feel it’s partly my failure to spend enough time with her directly to ensure she understands. She is the 4th child and I am, in fact, a bit tired. Not an excuse, it just is.

Okay, back to the story.

Ignorance, is, in fact a lack of knowledge or information.

Willful ignorance, however, is to have the information and yet deny it’s existence or reality.

I believe, hers was merely ignorance and yesterday, I decided to put my theory to the test.

“You’re going to clean this entire kitchen and do it RIGHT before we do ANYTHING else today” I said to her. “No stopping for food, no TV, no music, no anything else. If you take a break, fine. You’ll take it right here. When you’re done with your break we’ll keep going. I’ll stay here with you until you finish.” I said.

“You’re being too hard on her” you might think. Am I? I don’t think so. Was I met with resistance? Absolutely!

Yesterday was uncomfortable in every sense of the word. Was there yelling? Yup. Screaming? Yup. Anger? Probably. Denial? Undoubtedly. Harsh words? Without question. Stubbornness? You betcha!

But, there was also enlightenment and insight and understanding and learning.

To get an idea of the scope of her job, think precision. Think pristine. Think white gloves. Think an operating room. Okay, the last one, maybe not so much, but close. I wasn’t going to let up on her and give in.

Our kitchen area is a common area like no other. It’s a central location in our house, literally. In the exact middle, with a floor above it and a floor below it. Where school projects are made. Where clothing is left. Where shoes are often put on and taken off. Where food is prepped several times a day and meals are made. Where garbage collects. Where cats reside and look for any and all handouts. Where 4 loads of dishes are done per day. Where hand-washing takes place. Where 3 pots of coffee per day are made. Where people go to do their work and read and relax. Where we eat, as a family, every night.

Point being, it gets a LOT of traffic and, if we’re not careful, it gets out of hand, quickly.

So, yesterday, we started the breakdown of how to manage it, get it clean and keep it clean.

First, she had to identify everything that didn’t belong in the kitchen. This was a job in and of itself. Lots of arguing, but ultimately, she made it through and removed it all and found rightful owners.

Next, she had to clear all 7 counter areas of anything that didn’t belong on the counters. Again, I was met with resistance, but we made it through and she found the right ‘spots’ for every. single. item.

I stayed with her and made sure it got put away where it belonged.

Then we looked to clean all surfaces to the point where they were all smooth to the touch.  Then, we focused on sweeping, on pressure, on piles, on being thorough and on moving everything out of the way and doing a 100% job. 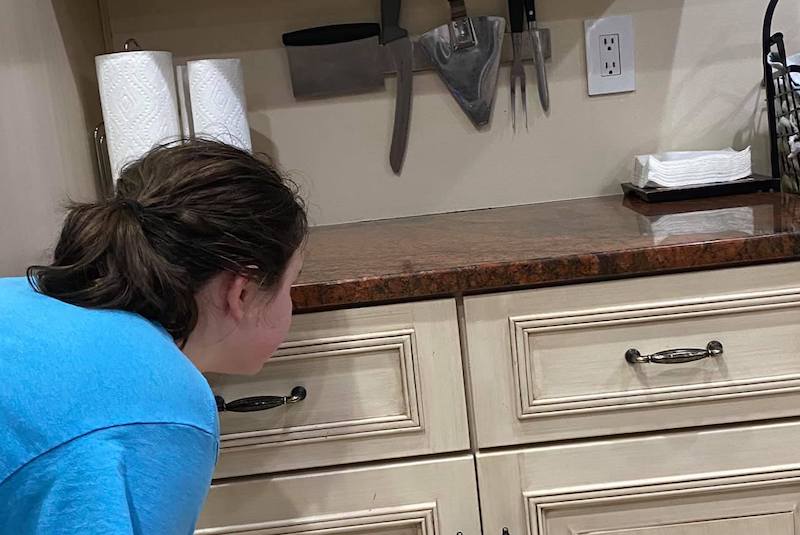 By the way, did I mention I’m sometimes stubborn?

Have I done this with each of the kids? Yes. It doesn’t happen often, but it’s part of the process. It really only happens once we hit the boiling point and yesterday, I was boiling.

Each time she completed something she had a bit of pride (that’s a side effect of forcing someone to do something).

This little project surpassed the one hour point. An hour in and she was frustrated, but seeing changes.

Two hours in and she’s now survived several ‘discussions’ (for lack of a better term) and has resorted to an unhappy “fine, I’ll do it but I’m not happy” face.  Me? I’m just getting started as I’m pacing myself.

Three hours in and we’re getting somewhere but she keeps saying “I’m done” and I keep saying, “great, now let’s look for this” and her frustration is mounting, but she keeps on.

Four hours in she’s fading. We started at 8am and it’s now noon. Hunger has set in. She’s made tremendous progress, but she’s mad as hell. She can’t believe how much work there was and continually reminds me that this isn’t fair.  I agree with her and we press on.  She’s also had several small breaks but only realizes that nothing gets done and she’s no closer when she stops.

We’ve also discussed a term called “sticktuitiveness”, which is the ability to stay with a project until it’s complete. I build this into my work-ethic definition and it surfaces regularly around here.

We pass the five hour mark and she’s realized that it’s all within her reach. There’s a finish line and her actions are the only thing that get us there. We’re both hungry and aggravated, but there’s something different now. Her angry face (although super tired and exhausted) has turned into a slightly determined and focused face.

Five and a half hours in she finishes.  An exuberant high-five and then a near collapse with tears. Food quickly consumes our thoughts and we dive in. Immediately thereafter, she cleans up afterwards and gets it right back to where we started when it was super clean.

I told her we’d repeat this process every single day until she sees things before me and notices everything I’d notice. After she completes the job each morning (it’s supposed to be done at night, but the rework is first thing in the morning), we’d start our school work.

Yesterday sucked. But it was also fantastic.

She learned and actually “got it” for the first time.  Last night, I walked out in the kitchen and found her inspecting her work (hence this picture). I was thrilled!

This morning, we had exactly 2 minutes of rework and we immediately got to our school work.  The kitchen was in the best shape it’s been in months.  Better than when the others had been taking care of it as well.

So, yeah, it was a rough day, but no, I wouldn’t do it any differently.

I don’t believe, at all, that work ethic is just something you’re born with.  It comes from wanting to do the right thing and completing jobs to the best of your ability. That part sometimes needs some prodding. Someone who believes in you before you believe in yourself.

I’m hopeful that yesterday was a turning point. If so, my life will be infinitely easier and so will hers. And so will those who depend on her.

It was an important life lesson and not one for the faint of heart. I’ve tried explaining, showing her, asking her, telling her, punishing her, etc., but none of it seemed to work until yesterday. Learning, it turns out, doesn’t just happen to you. It’s an active process.

Yesterday was active and was worth participating in, even though it was extremely painful.

She can no longer claim ignorance. From now on, it’s willful if she so chooses not to do her job.

So, please join me in a virtual toast to clean kitchens, exceeding expectations, self-pride, leaders that push you beyond what you thought you could do, sticktuitiveness, building a work-ethic, and overcoming your own mental hurdles.