Yesterday was the 2A State Championships in Owensboro, KY and it just so happened to be a big deal.

You’ve probably seen my writings about lessons, mistakes, failures, etc. and how, if you use them wisely, they prove to be great stepping stones. Well, yesterday, McKenzie had a rough start and walked away with a bogey (+1) on her very first hole of a challenging 5400 yd course we’d never seen nor played in semi-warm, mostly wet & windy conditions (15+mph).

Getting off to a rough start has happened before and it’s set the tone for the day… but, this time she said “there’s no way I’m playing like this today” and she followed it up with a fairly routine par and then a fired-up birdie, and just like that she was back to even after 3 holes.

Mood changed. Confidence came back. Wheels were spinning.
4 holes later she’s making mistakes and capitalizing on her short game with several up & downs, which is precisely what she was struggling with over the 2 days prior. We revisited weight changes, hand positions, types of shots (chips, pitches, flop shots, bump-and-runs, etc.) and club choices just before the round and I could see that she was using it all to her advantage.

She got into a bit of trouble on the 8th and 9th holes and gave up some ground but made the turn at -1 after 3 birdies and 2 bogies.

Unlike the previous two days, yesterday she was blatantly aware of eating, staying hydrated and using the rest room at this point as we’re now a good 2 1/2 hours in. Proper nutrition and staying ahead of hunger and dehydration is critical to maintain optimal levels and not start dragging because of an energy loss.

On hole 10 she managed to have two monster hits and had her ball sitting about 24 feet back right of the pin in 2 and it was a par 5. Downhill, right-to-left slope in a light drizzle and she’s looking confident. The 2nd video is of that very Eagle putt and, it looked good all the way until it stopped at the proverbial 99.9% mark of being the absolutely perfect. She thought she had made it… but her excitement dwindled and it looked like someone let the wind out of her sails as she watched her ball just sit on the edge of the hole.

Now, knowing the rule is that you have some 10 seconds from the last movement before you are required to mark your ball, she opted to wait. If you listen closely you’ll hear her say “Are you kidding me?” around the 5 second mark as she was absolutely deflated. At the 7 second mark, the ball identified with the iconic Nike ball that Tiger Woods once had sit on the edge and then just fall in… except hers was a bit longer. At 7 seconds in, her ball fell and so did her score as she dropped to 3 under (-3). She nearly made another Eagle a couple holes later where she was less than 6 inches from the cup but managed to drop to 4 under (-4) with a tap in birdie.

Historically, big shots like that have increased her adrenaline and heart rate and often causes problems on the next holes. I was watching and she was managing her breaths and excitement very well as she got right back to business and focused on the next shot.

Now, I’d like to say a couple of things. First, she’s had several low rounds and rounds AT par, but NEVER has she had a below par round (I would have said sub par, but that sounds like it’s not good enough). 🙂 And, she’s been in positions like this where her nerves had gotten the best of her and she’s struggled coming down the final holes.

3 holes left and she’s had a couple more big up & downs to save par and she’s still 4 under. Par 5, Par 3 and Par 4 and she has to do no worse than +3 to still get below par. I know it. She knows it. Paxton knew it. But, it doesn’t change the next shot, where you have to focus.
First up, the par 5. She leaks one long and way to the right, potentially out of bounds, way off course. She finds it about 4 feet from the line and she actually has a shot at the green, but there’s a large sand trap directly in front of her and then a tight green where the pin was on the back left corner, and then out of bounds back behind the green about 15 yards or so.

I’m looking at her and am sure she’ll take the easy road and lay up to set up her next shot as she has plenty of fairway in front of her.

Does she lay up? No. She goes for it and damn near makes it but gets caught in the sand. I close my eyes and say “how many times have we seen this, Pax?”

We walk down and watch her sand shot some 2-3 minutes later. All she has to do is get it out and on the green and then 2 putt and she’s good. A slight mis-hit in the sand creates a much faster out as her ball shoots up and straight through the green back behind the pin and into the rough, nearly out of bounds again, but not. “Holy crap, that was close to being bad!” I said.

Now, she has to pull off a flop shot from above the pin onto a tight down slope with sand on the back side. Lots can, and often does go wrong, but this is one of the shots we worked on just hours before and she’s pulled it off several times during the day, much to my delight. As it turns out, she confidently swings and hits a beauty that trickles down near the pin and nearly goes in. Now, a short putt to save par and she nails it.

Par 3 is up next and she hits a beaut up on to the green about 30 feet from the pin. Very casual 2-putt and she’s now hearing for the 18th tee box still 4 under. What could go wrong?

From a distance I can see that her heart is beating a bit faster than normal and her nerves are wanting to creep back in. She’s been here before and knows what can happen. I see her set up and can tell that something’s not right.

She wiggled, she waggled, she looked down the fairway., she looked at her ball. Then, she repositions again, wiggles, waggles, looks up, looks down, adjusts, and then steps back again. My side commentary to Pax is that she’s way over-thinking again and needs to step back and start over.

She finishes her set up and pulls the trigger. If her normal sequence was 1, 2, 3, 4… this tee-shot would have gone like this, 1, 4, 3, 2. That’s what nerves and over-thinking get you. Her hopes of hitting her 5-wood 230 down the center of the fairway leaving her a good 75 yards or so for her approach end up with a 93-yard worm-burner down the left rough with a much different scenario to get out of.

I watch as she grabs club after club and then wrestles with lay-ups or trying some miraculous shot and I hope she chooses wisely. She chooses a lay-up and absolutely drills her 4-wood across the fairway and almost into the rough some 75 yards away still with a pin tight on the right and sand in front of her and out of bounds to the right with a gallery of about 50 people watching as she was in the final grouping of the day. “Oh man, this is a tough shot”

I say to Paxton and say she’d probably do best to go for the center of the green and two-putt for bogie and still end up at 3 under. Lots can go wrong with even a slight mis-hit.

She chooses to go right at the pin to silence the naysaying voices in her head that started out saying where not to hit and she changed her thoughts to be where she wanted to hit, instead.

She had an air of confidence about her and she didn’t want to disappoint the crowd, so she let loose and stuck the ball some 3 1/2 feet from the pin. And, just like that her smile emerged as she walked up with her heart still racing. She knew what was on the line & she knew this was her moment.

Now, she’s got a chance for her 10th up and down of the day and she just has to pull of the putt with shaky hands, a bundle of nerves, a heart racing, and 50 or so people waiting to see if she could really pull it off.

This time, her sequence went in order… 1, 2, 3, 4 and the ball dropped to the bottom of the cup. She pulled off what she once thought would never happen and did it in style.

Congratulations on pulling it all together when you needed it most. I’m so proud of how you adjusted and made the best of of a very difficult day.

Way to go, kiddo! Don’t ever forget this feeling of accomplishment. You’ve earned this one the tough way. 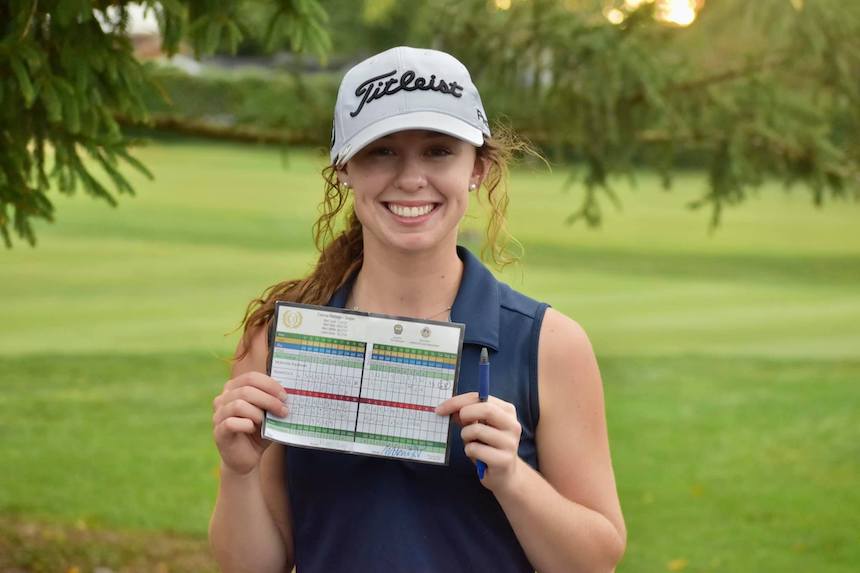 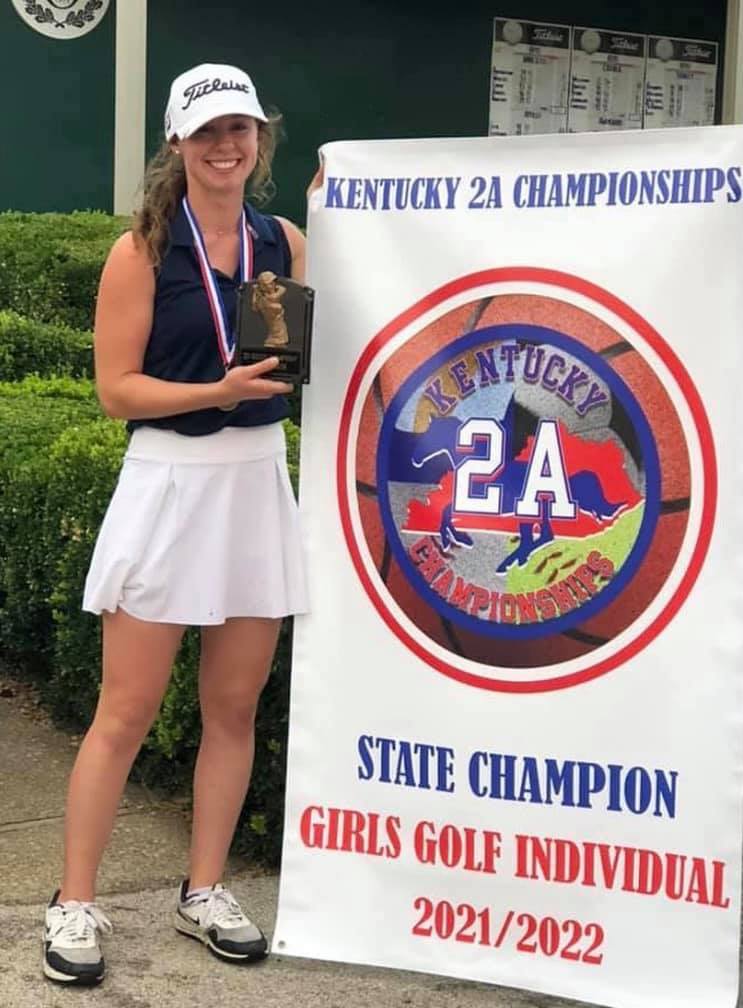