I’ve witnessed head-on collisions, roll-over accidents with ejections, mass fights with multiple injuries and tramplings, flipped golf carts, a friend getting a large gaffe through his calf, broken bones with bones protruding, animals getting hit by cars, the last moment of someone’s life… the list goes on and on.

You never know when something extra-ordinary (I hyphenated it to show the true breakdown of the word) is going to happen.

Also extra-ordinary are the things I’ve witnessed that were memorable in a good way. I’m a huge fan of these.

The last-second Hail Mary touchdown pass from 55 yards away to win the game. The walk-off home run to end a Championship. The first second of each of my 4 kid’s lives.

Thousands of “firsts” when it comes to each child.

These are also part of life… the good parts.

With that, I’d like to tell a short story worth sharing.

A couple of days ago Paxton played in his first-ever High School Boy’s Golf Tournament. He’s 12, but he doesn’t look like it nor play like it, but that’s not important for this story.

He was paired with two young men, Owen and Dalton, both much older that he.

As far as spectators go there was Dalton’s dad, Owen’s mom and sister, and then our crew of 5. Rarely do we all get to watch one player, but it happens, and, if you’ve been there, you know I like to add some energy to the “air” that surrounds the players. It just so happens that, when the conditions are right, all spectators on our hole start cheering for all players and it’s genuinely neat to see the players feel like they’re a celebrity.

As the round went on there were cheers, celebrations, high-five’s and some fist pumps. In the first 7 holes there had been probably 4 shots between the 3 of them that had hit and stuck within 5 feet of the pin. It was cool to see as it seemed like a target practice of sorts.

They had all had pars for 3 holes in a row and they were “on a roll”, or “feelin’ it” as a collective group.

Then, on the 8th hole at Eagle’s Nest, they were set to tee off.

I’d say it was a good 160 yards, downhill over water with a decent 10 mph wind. Dalton tees off first. A high, perfectly-straight, beautifully trajectoried shot. From the side I watched and, at the half-way point, I said to Joanna “Whoa! That ball’s right at the pin.” A second later, it hit the soft green, created a nearly 1 inch crater, and then somehow crawled out of the crater and rolled backwards a foot. The first impact was about 2 feet from the pin off to the left and the ball ended just below the pin.

Me to Dalton: “Why would you not just put it in the hole already?” with my arms outstretched and a puzzled look on my face. “I’ll try to do better on the next one.” he says.

Then Paxton hits. Bam, high towering shot right at the pin as well, but this time it’s about 8 feet past. It sticks, we cheer, we question, much the same as Dalton’s.

Then Owen. A bit of pressure here after 2 great shots, but he doesn’t disappoint and neither did the cheering section. He ends up 12 feet from the pin.

All 3 balls in a perfect line, on the green. Unfortunately, this hole broke their streak of 3 straight pars as a group. Dalton would Birdie it while the other two got Par.

The clapping for the good and the jeers for the ugly continued, as did the energy, hole after hole.

Then we work our way to hole 15. A LONG, narrow, hard-to-see par 3 that was about 220 yards but playing a bit more based on wind and pin placement.

Joanna and I opted to walk up next to the green so we could help them find their balls in the event they send it either left or right (to which we’d be correct in our decision for both Paxton and Owen).

Dalton was the first up to bat though (I understand he also plays baseball). The catcher gave the signal, the pitcher delivered the pitch right down the middle and Dalton read the pitch beautifully.

Not 2 feet this time, but 2 inches away, off to the right. That ball hits like it just punched the green in the face. A funny sucking sound was made as I’m sure the green was merely groaning from the sheer force that had just pummeled it.

In a strange turn of events the green immediately fired back and shot the ball out of the crater it had just nestled into so lovingly. The ball went airborne about 3 inches and 2 inches to the left and quickly settled in for a long winter’s rest in the cave that was already set up.

Now, it took us probably only about .02 of a second to erupt into a frenzy over what we just saw. Unfortunately, all the other people were at the other end and couldn’t see the pin very well (mind you, this is nearly 700 feet away and you’re trying to see a tiny white golf ball).

Our excitement wasn’t new for the day (as I mentioned earlier), so they didn’t exactly know how to react. Dalton had his hands outstretched as if to say “what just happened?” as I sincerely believe he couldn’t tell if it went in or if he just lost sight of it.

A Grand Slam of Grand Slams. A Winning Touchdown Pass. A 1/2 courter at the buzzer. A Hole-In-One.

Dalton had never had one. None of us had ever seen one. Celebrations ensued.

My understanding is that Dalton went on to win the tournament, but I think, more than anything, he did something he’ll never forget, nor will we.

The moment came and went but will live on in our mind’s forever. The photo shows him standing there just after picking up his ball and demonstrating his best Tiger fist-pump.

Legend has it that Dalton was up on that tee-box and in his best southern revival voice he exclaimed “Can I get a witness?” 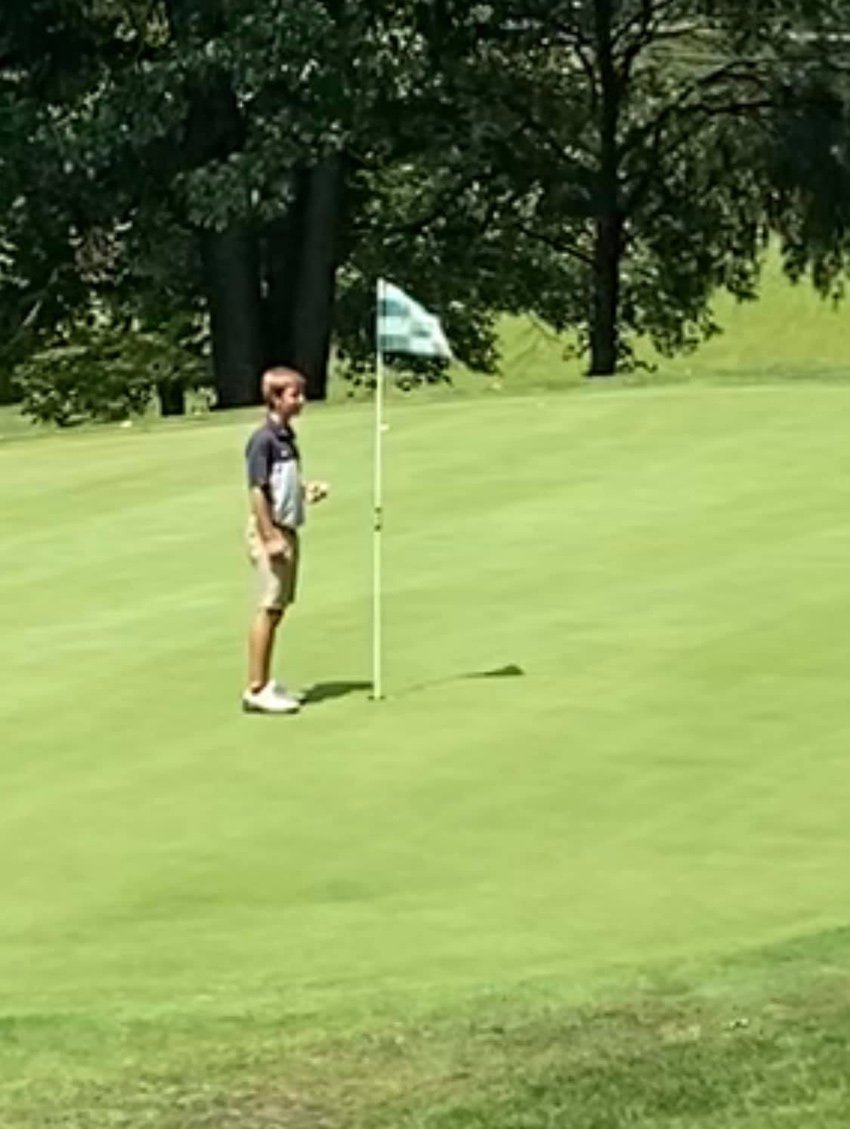