I think I’ve got it.

If ever there was a post that everyone should read, it’s this one. It’s going to take you on a journey through your own habits and environment while touching on and highlighting some concepts you’ve most certainly heard and putting the puzzle pieces together. Please share this and give everyone you know a chance to think critically.

And yes, time is of the essence, so make time for this.

I recently visited my long-time trainer, Chad, and thanked him for the time he spent teaching me about Time Under Tension (TUT). Studies (you can look them up if you want more) have recently shown that TUT results in important physiological changes due to acute responses of mitochondrial and sarcoplasmic protein synthesis. Stay with me here. This means, at a cellular level, the more prolonged exposure to something, the more it affects it. If you’re looking for muscle building, this is great, regardless of age.

Please read every word of this and don’t just speed-read or skim.

But there’s something more important. Much more. And, I have to be super careful about my word choice here so I need for you to connect dots, quickly.

Up until Father’s Day, at night, I kept a digital device that allows me to communicate about 2 feet from where I sleep. I also kept said device on my person (my back right pocket) for most of every day. I no longer do either.

Up until Father’s Day, I had no idea how strong our microwave was as it related to two letters, when together without a gap word. The letters were R gap F (keep up, you’re falling behind).

Up until Father’s Day, I had no idea that the time spent showing our face to each other over distances with a device (oh, please tell me you catch that one) was nearly the equivalent of using our microwave. I also had no idea that loading data of any type on my said ‘communication device’ or even talking on it would prove to be absolutely paralyzing to my mind once I saw what it was.

Up until Father’s Day, I had no idea how many pockets of ‘danger zones’ I drove through on my way to town.

Up until Father’s Day, I was unable to see all the intangible things that I could only feel before. I was stunned.

Up until Father’s Day, I had no idea how much TUT I had put myself under as well as my family, unintentionally.

The tension I’m referring to here relates to the word I referenced above at the end of the microwave paragraph and then a 9-letter word that rhymes with secrecy bur starts with FR.

Unfortunately, over the last year and a half, an entire network of something has been being put up all across the U.S. and the world that has the potential to affect everyone like never before.

Oh, and why Father’s Day? That’ the day I received a gift that allows me to read FME’s (those 3 letters are in reverse order).

Turns out, about the same time the world was asked to work or do school from home (except those considered ‘essential’), we were a couple of months ahead (we had been doing homeschool) and upgraded our service to be as strong as it could. It helped us get faster speeds, faster load times, faster, faster, faster. Yay! But, I couldn’t see “it” before Father’s Day.

We were sick last year for over 3 months. We hardly left the house, except to shop every now and then and to go to the doctor’s. We had severe fatigue, headaches, low-grade fevers, eye problems, tight chests, tingling, and blood oxygen levels that were lower than normal. We never figured out what caused everything but I’m going to say there’s some high levels of something that we’d continually been exposed to that cause all those things above and many more.

With my gift on Father’s Day, it came with an instruction sheet that showed levels that were considered ‘safe’ (0.2 and below were safe – yes, that’s zero point two, not two point zero)- unfortunately, what I found is that there are many ‘everyday’ things that we’d been using, excessively, that were nowhere near the ‘safe’ levels.

With my gift on Father’s Day, it came with an instruction sheet that showed levels that were considered ‘safe’ – unfortunately, what I found is that there are many ‘everyday’ things that we’d been using, excessively, that were nowhere near the ‘safe’ levels.

I can’t say with any certainty that others are being affected or that they were, but I can tell you it sure seems like that’s a possibility. Especially those of you who’ve recently had half the number of 10 of the letter G installed in your area or on your communication device. You’d be blown away to see what the levels are.

So, yeah, I know there’s something out there causing something that there’s a debate about. Was it in a cab (replace the c with an L) or was it a cat (replace the c with a b), or maybe, was it to get you to look and listen to experts on both of those instead of looking at what all was being put at the tops of buildings and in houses and pockets around the world.

F*ck me if I’m wrong, but I’m pretty sure the network is nearly set up and connected. I feel like our TUT is about to be amplified and the effects could be greater than anything we’ve ever seen as long-term, continuous exposures at this level have not previously been seen or studied.

Friends, listen to me, and check this out.

Buy you one of those things (or get your hands on one) that had the three letters backwards earlier to see for yourself. Like, really, you HAVE TO SEE IT FOR YOURSELF. A good one is pricey, but it’ll help you navigate the short-run, and perhaps the long-run.

It’s life and behavior altering – not even kidding.

And for my family who had a hunch this gift would be a hit, Happy Father’s Day to me… and to you.

PS – check my photo for the time under tension clue under back behind my mat – the readings change continuously, but once you know what’s safe you’ll understand what’s not. And, how ‘not’ it is. 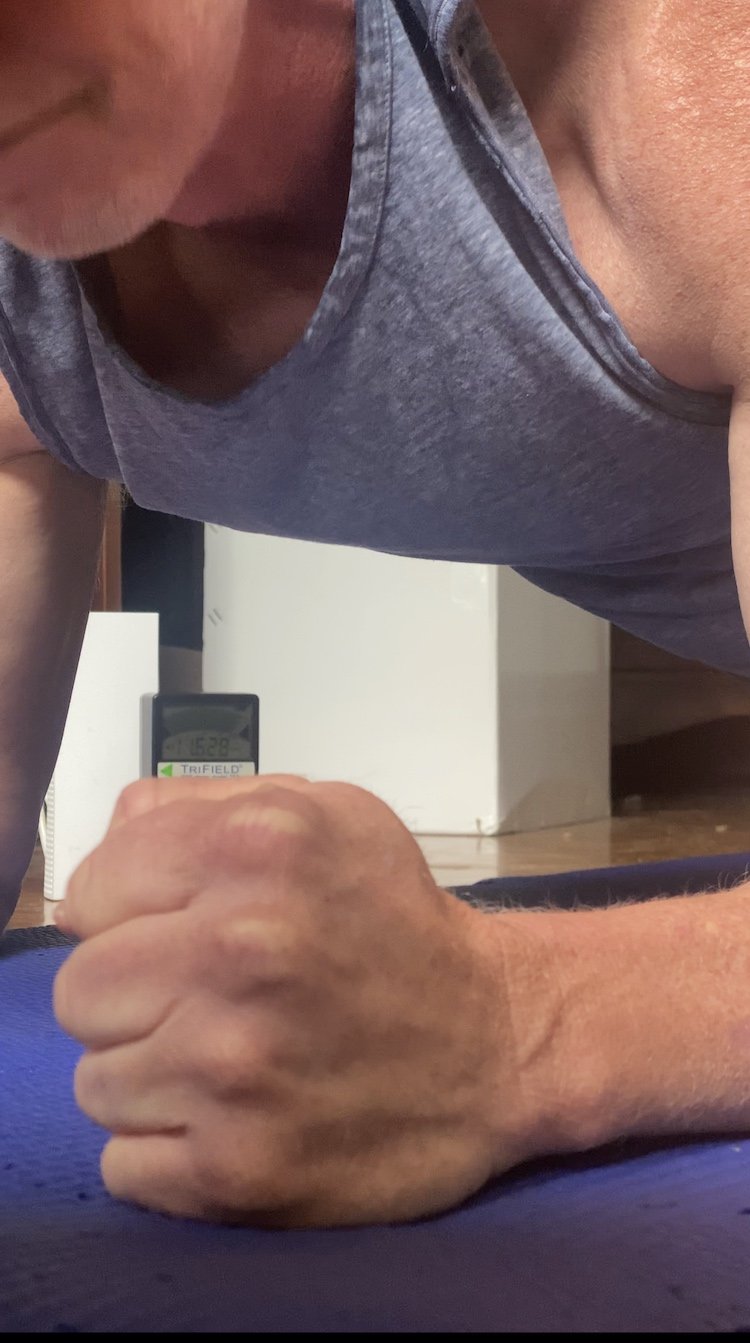 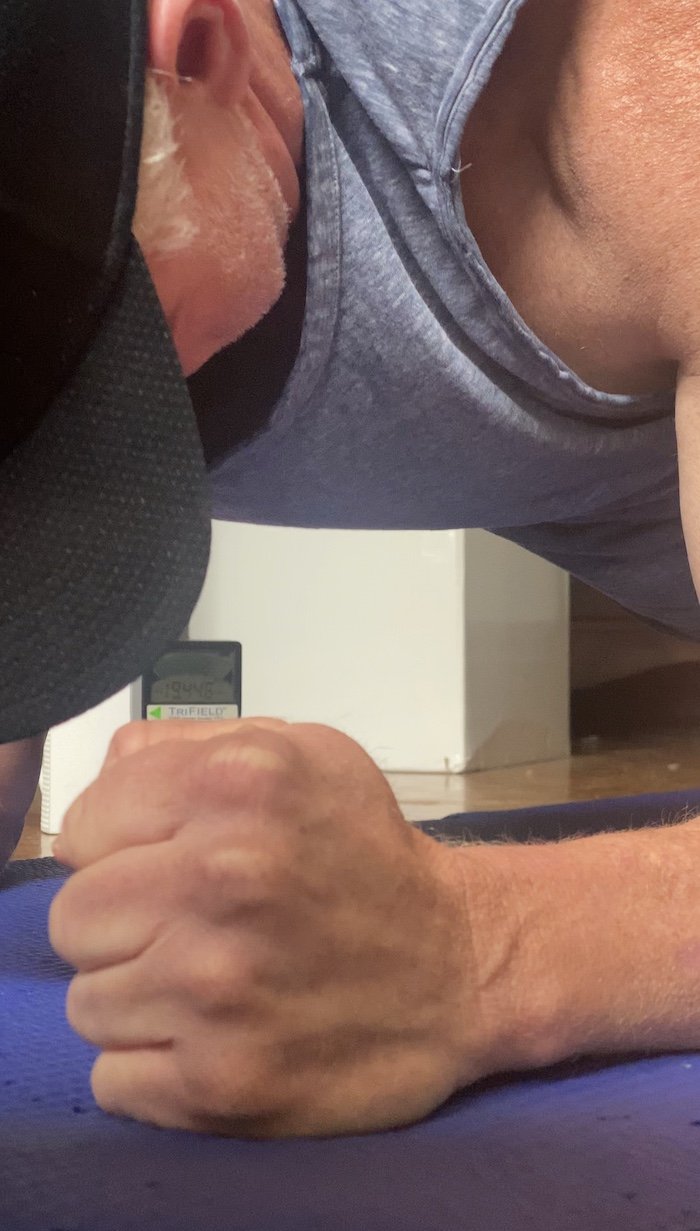